2016/9/27
PRESS RELEASE N0: JPNEMPAK 16-30
PRESS RELEASE
Islamabad: 8th September, 2016
Mr. Takashi Kurai, Ambassador of Japan to Pakistan, hosted a send-off dinner on Thursday 8th September 2016 at his official residence for the scholarship grantees to study in Japan under various scholarship programs offered by the Government of Japan. The programs under which scholarships have been granted to the Pakistani students this year include Teachers Training Program (18 months), Young Leaders’ Program (1year), Japanese Language Training Program for Foreign Service Officers (8 months) and direct MEXT Research Scholarship  (2-5 years, until their Research is complete), 2016.
The Embassy of Japan earlier today also organized a pre-departure orientation for the scholarship grantees who would be departing for Japan shortly to study in Japanese universities under various scholarship programs. Pakistani alumni’s of the Japanese universities were also invited at the orientation who shared their knowledge and experiences of studying and living in Japan as the young scholarship grantees.
In Teachers Training Program (TTP) 2 female teachers have been selected, In Young Leaders Program (YLP) 2 male government officials, in Diplomat Training Program 1 diplomat was nominated and selected, and around 16 students have received direct MEXT Research scholarship (they did not apply through the Embassy but were nominated directly by their respective Universities in Japan). The Embassy of Japan also selects Pakistani students every year under its MEXT Research Scholarship Program to study in their respective fields at the best universities in Japan.
Ambassador Takashi Kurai while speaking at the occasion congratulated the scholarship grantees and also expressed his hope that they would come back to Pakistan to utilize the knowledge and expertise that they would acquire in Japan for the future development of Pakistan and that they would always become bridges of friendship between Pakistan and Japan. (End) 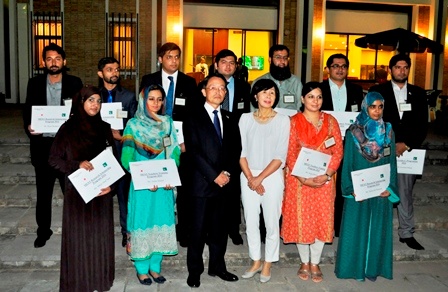