The Embassy of Japan in collaboration with the Pakistan National Council of the Arts organized a show titled “Japanese Cultural performance “ on Saturday 14th October 2017 here at the auditorium of the National Art Gallery Islamabad. The cultural performances comprised of Wadaiko drumming (traditional Japanese drums), Japanese martial art demonstration, Japanese & Pakistani songs and display of traditional Japanese drums and dance.

H.E. Mr. Takashi Kurai, Ambassador of Japan to Pakistan, while speaking on the occasion said that this year marks the 65th anniversary of the establishment of diplomatic relations between Japan and Pakistan and events like that of today helps in bringing the people of two countries closer through cultural interactions. Ambassador Kurai said that the purpose of hosting cultural events is to promote cultural harmony and expressed his hope that Japan and Pakistan’s friendship will continue to strengthen further in the coming years.

The show started with the splendid performance of traditional Japanese drum beating called Wadaiko by the Japanese volunteers that was followed by the Japanese martial arts demonstration Kendo, Iaido and Karate. Wadaiko is the Japanese name for both the act of drumming in a traditional Japanese style (of which there are many) and the drums themselves. The name comes from the Japanese words 'Wa', meaning 'Japanese' (in parallel “harmony” as well, and 'Taiko', meaning 'drum'. In modern Japan, wadaiko has become more of a performance art, seen at festivals or in concerts.

The music performance by Japanese band “Noor Japan” together with the Pakistani musicians enthralled the audience and won great applause from them. Pakistani children were not far behind in entertaining audiences when they performed dance. Mr. Katsunori Ashida, Head of Public Affairs, Embassy of Japan, also greatly amused the audience when he sang popular Pakistani songs “Sammi Meri Waar Main Vari” sung by Shafaullah Khan Rokhri and “Main Tenu Samjhawan Ki” by Rahat Fateh Ali Khan.

Later, children of Islamabad Japanese School performed a lively set of traditional dance and a drum beat ensemble. The energetic and rhythmic dance with Wadaiko drumming by the students entertained the audience by their heart-warming performances. This cultural performance provided an opportunity for the Pakistani people to discover Japanese culture and tradition through their little Japanese friends. (End) 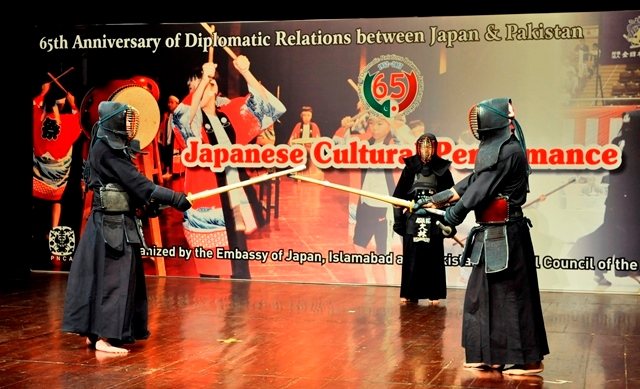