Pakistani High School Students to Visit Japan under the SAKURA Science Plan
Islamabad: 21st August 2019
A group of ten high school students of Cadet College Hasan Abdal along with their one accompanying supervisor will be visiting Japan from 13th to 19th September, 2019 on the invitation by the Japan Science and Technology Agency (JST) under the Japan-Asia Youth Exchange Program in Science which is known as the “SAKURA Science Plan.”
The Embassy of Japan today arranged a pre-departure orientation session for the visiting students and also presented travel documents to them.

H.E. Mr. Kuninori Matsuda, Ambassador of Japan to Pakistan, while speaking on the occasion, congratulated the students upon their selection for SAKURA Science Plan. He hoped that the young Pakistani high schools students would get an opportunity during their visit to Japan to experience the modern scientific and technological advancements of Japan. The Ambassador said that Japan would continue helping Pakistan in its efforts to develop its young human resource power.

The Japan Science and Technology Agency (JST) annually invites outstanding young students and young professionals from Asian countries on short-term visits to Japan to promote exchanges between the young Asian and Japanese researchers in the field of science and technology. This program also provides the visitors an opportunity to experience the advanced Japanese scientific technology. 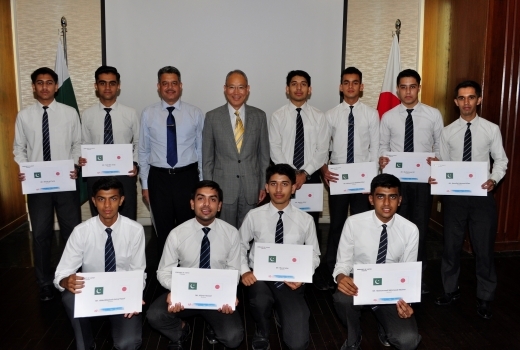