The Government of Japan has conferred the 2020 Spring Decorations “The Order of the Rising Sun, Silver Rays” upon Ms. ORITA Toshiko, Vice President of the Pakistan-Japan Cultural Association (PJCA), Islamabad, in recognition of her significant contribution to the promotion of long-term cultural exchanges and friendly relations between Japan and the Islamic Republic of Pakistan.

H.E. MATSUDA Kuninori, the Ambassador of Japan to Pakistan, on behalf of the Government of Japan, on December 23rd conferred the decoration “The Order of the Rising Sun, Silver Rays” upon Ms. ORITA. The conferment ceremony was held at his official residence with limited participants, including Ms. ORITA’s family and her close friends, Dr. Abdul Hafeez Shaikh, Federal Minister on Finance & Revenue, and Mrs. Nadene Shaikh, while taking infection prevention measures against COVID-19.
Ms. ORITA, also laureate of Japanese Foreign Minister’s Commendation, has been serving as Vice President of the PJCA since 2003. She also worked in the Embassy of Japan in Pakistan as a senior staff in the past. As a fluent speaker of the Urdu language well-versed with Pakistani culture, Ms. ORITA has worked diligently over the years both independently and from the platform of PJCA to promote Japanese culture.

After her arrival in Pakistan in the 1960’s, she hosted numerous lectures and exhibitions of Ikebana and fabric flowers, becoming the pioneer of these Japanese art in Pakistan. Through her teaching, many Pakistanis acquired the art and became Ikebana artists themselves. In addition to cultural activities, she provided support for the socially vulnerable in Pakistan through PCLAPA, Pakistan Cleft Lips and Palate Association. She devoted herself to care for the victims of the earthquake in 2005 and contributed to various projects in Gujrat in the field of health and medical care.

Ambassador MATSUDA, while speaking on the occasion, congratulated Ms. ORITA for receiving this prestigious decoration by the Government of Japan which is an acknowledgement of her dedicated efforts for the promotion of Japan-Pakistan cultural relations. The Ambassador deeply appreciated her long years of service in consolidating Japan-Pakistan cultural relationships.
“I believe that cultural exchanges, in particular, contributes significantly to deepen mutual trust and understanding among the people which should be the very foundation of any relationship between the countries,” said the Ambassador. He expressed his sincere hope that this contribution will further promote and strengthen the cultural relations as well as people to people contacts between the two friendly nations.

Expressing her gratitude upon receiving prestigious decorations, Ms. ORITA said, “I feel great honor today for receiving ‘The Order of the Rising Sun, Silver Rays’ from His Majesty the Emperor of Japan. My journey in Pakistan started almost sixty years ago and it has always been my dream to bring the people of Japan and Pakistan further closer through deepened cultural relations.”
Dr. Abdul Hafeez Shaikh, Federal Minister for Finance & Revenue, while speaking on the occasion stated that Ms. ORITA is an excellent Ambassador of Japanese culture in Pakistan and this award is not only an honor for her but also an honor for Pakistan as well. He deeply appreciated the services rendered by her on promoting relations between Japan and Pakistan which are based on affection and combined interests. 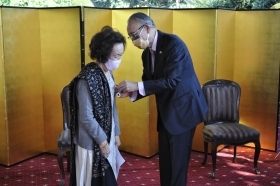 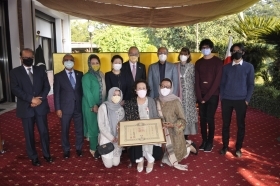