Japan provides 1,986 million Japanese Yen for the for the Project for the Installation of Weather Surveillance Radar in Sukkur City

Japan provides 1,986 million Japanese Yen for the for the Project for the Installation of Weather Surveillance Radar in Sukkur City
Islamabad: 25 January, 2021

The Government of Japan has agreed to provide grants approximately worth 1,986 million Japanese Yen (Equivalent to around 19 million USD / around 3,057 million PKR) for installation of weather surveillance radar in Sukkur, Sindh province.

Notes to this effect were signed and exchanged between H.E. MATSUDA Kuninori, Ambassador of Japan to Pakistan and Mr. Noor Ahmed, Secretary, Ministry of Economic Affairs in Islamabad and a Grant Agreement (G/A) on the details of implementation of the project was signed and exchanged between Mr. FURUTA Shigeki, Chief Representative, Japan International Cooperation Agency (JICA) Pakistan Office and Ms. Syeda Adeela Bokhari, Joint Secretary (Japan/NGO/INGO), Ministry of Economic Affairs.

In the signing ceremony, H.E. MATSUDA Kuninori, Ambassador of Japan to Pakistan stated “ the Government of Japan will continue to work together with Pakistan to make this country disaster-resilient, making good use of experience and expertise Japan has gained from many disasters in the past.” and Mr. FURUTA Shigeki mentioned “Enhancement of weather surveillance capacity will mitigate the damage caused by natural disasters”. Both emphasized importance of disaster management.
Through this grant aid, the Government of Japan and JICA continues to assist disaster management conducted by the Government of Islamic Republic of Pakistan. 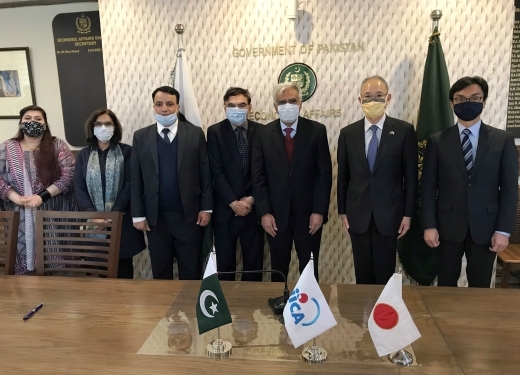