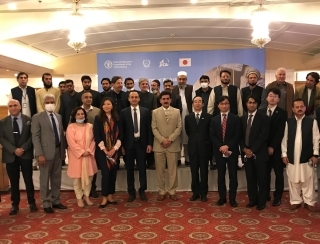 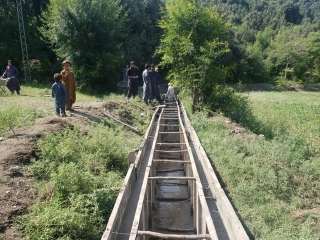 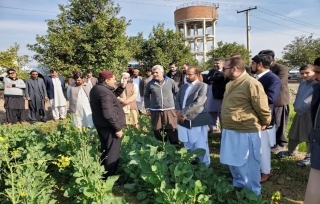 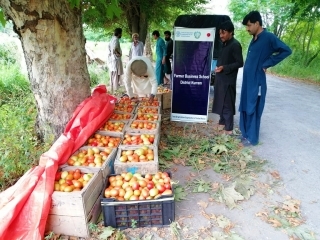 The Government of Japan and Japan International Cooperation Agency (JICA) in close collaboration with the Government of Khyber Pakhtunkhwa (GoKP) and Food and Agriculture Organization of the United Nations (FAO) supported 50,762 households under the “Project for Restoration of Livelihoods in the Merged Areas of Khyber Pakhtunkhwa (Phase II)” in Khyber and Kurram districts.

Japan’s grant of US$ 5.3 million was extended in continuation of the initial support of US$ 5 million for “The Project for Assistance to the Recovery and Development of the Agricultural Economy in FATA”, implemented from 2015 to 2017, as vital support for 77,200 returning families/households to rebuild their lives upon their return to home after years of displacement in KP Province.

This year marks the 70th anniversary of a longstanding friendship between Japan and Pakistan, and this project shows a great example of how Japanese people have dedicated their support to the people of Pakistan.

The ceremony was held in Islamabad to celebrate the completion of the project, attended by the Ambassador of Japan, H.E. Mr. WADA Mitsuhiro, Chief Representative of JICA Pakistan, Mr. FURUTA Shigeki, FAO Representative in Pakistan, Mr. Farrukh Toirov, Secretary Agriculture, Government of Khyber Pakhtunkhwa, Dr. Muhammad Israr Khan, and high level officials of relevant departments of the Government of Pakistan.

Speaking on the occasion, H.E. Mr. WADA said, “We recognize the livelihoods in Pakistan have been increasingly affected by the Afghanistan humanitarian crisis, and we consider sustainable agriculture essential for securing livelihoods”, highlighting that “through our strong partnership demonstrated by this project, I hope we will continue to work together to achieve sustainable development in Pakistan.”

Mr. FURUTA Shigeki, Chief Representative of JICA Pakistan Office noted, “The project has contributed to ensuring food security through sustainable agriculture development, value addition in agriculture, and capacity development of those who engage in the fields of agriculture and livestock. It has also promoted the restoration and improvement of the livelihoods in Kurram and Khyber Districts. Building sustainable livelihoods is essential to achieve peace and stability in the region, and where peace and stability exists, further development and prosperity can be realized.

Highlighting the achievements of the Project Mr. Farrukh Toirov, Deputy FAO Representative in Pakistan said, “He is very pleased to see that all the deliverables of this project are successfully achieved”. He thanked the JICA and Government of Japan for giving FAO an opportunity to support the repatriated IDPs in the Newly Merged Districts of KP. He said that the economy of NMDs, based mainly on subsistence agriculture, has historically been weaker than the rest of the country, which was further accentuated by the mass-scale exodus of population to other areas as IDPs. The support provided by the Government of Japan has played a very crucial role in the recovery and rehabilitation of the returned families in Khyber and Kurram district of KP. He said that during the implementation of the project, the outbreak of Covid-19 pandemic in the start of 2020 had not only created a health-specific emergency but disrupted every sector of global, national and local economies. Furthermore, when the Government and other national and international partners were busy in coping with the effects of Covid-19, the locust invasion in different parts of the country posed another threat and further added to the people’s vulnerabilities of the target districts. Therefore, apart from its original mandate, FAO also supported its target beneficiaries against the Covid-19 and Locust infestation. More than 50,700 HHs were supported through the provision of quality inputs to resume their agri-base livelihoods and to start new enterprises under agricultural value chains. FAO has scaled-up its interventions to ascertain improved farming practices and enhance productivity and thus created linkages of farmers with the outside markets. He further said that by now, stabilization and wellbeing of the target HHs is mostly done, however, development initiatives need to further support the local market systems for enhanced jobs and incomes.

Secretary Agriculture, Livestock, Fisheries and Cooperatives’ Department, Government of KP, Dr. Muhammad Israr Khan while appreciating the performance of the project said, “The Government and people of Khyber Pakhtunkhwa are extremely thankful to the people and the Government of Japan for their continued support in the rehabilitation and development efforts of the internally displaced families of the former FATA, now the NMDs of KP.” He said that the Government of Japan, through JICA, has been supporting the rehabilitation of IDPs in Khyber and Kurram districts since 2015. During the 1st phase of their support from July 2015 to Sept 2017, about 77,000 families were assisted; and now under the 2nd phase started in April 2018 and ended in Dec 2021, more than 50,700 families have been supported. He said that agriculture is the mainstay of the people in the merged districts and plays a very pivotal role in their livelihoods. Therefore, the Government of KP is making all its efforts to enhance agriculture production and increase their sources of income through various developmental initiatives. He further said that apart from supporting IDPs, the Government of Japan and JICA have launched and implemented several other developmental projects in the province which have far reaching impacts on the livelihoods of the people. He emphasized continued support from the Government of Japan and other donors to ensure sustainable development and stabilization of the area. The Secretary also expressed his sincere thanks to FAO Pakistan for augmenting their efforts through the support of various donors, including JICA and the Government of Japan.

Several project beneficiaries who had traveled to Islamabad from Kurram and Khyber districts to attend this gathering briefed the participants how had they benefitted from this project.